It's High Time we talked about Detroit, Michigan

Detroit's just a great place. It started with the music that I like, but the whole area (is great). I like to go up to Mackinac and fish. I got a lot of reasons to like Detroit, but most of all, the music has always been the greatest part. I've been working with the kids - George Clinton [1]


Late 60s Detroit is a place that exists best in my imagination.. I picture it as normal to see the odd Motown star strolling into the studio at 2648 West Grand Boulevard and hear Berry Gordy's particular brand of driving soul pouring from every radio and car window. Obviously this is not the case, and Gordy himself felt that the Motor City had given him all that it could when he started the process of moving out to Los Angeles, but any place that births the music of Stevie Wonder, Funkadelic, Iggy Pop and the MC5 is going to be alright by me. 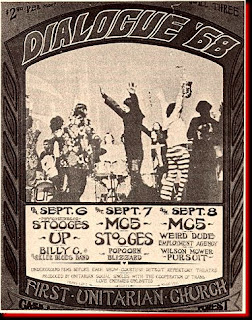 So, of course, I picture myself studying at the University of Michigan and getting the opportunity to see these great bands (and Ted Nugent) in the flesh. Late 60s Parliament must have been a pretty incredible sight as George Clinton broke away from the Motown mould to get funkier, dirtier and nastier. And quite simply cool.
Clinton was on Revilot records, home of Darrell Banks and the wonderful Debonaires, both of whom will feature in future posts. After a few non-hits for The Parliaments the label dropped Clinton. He later emerged on the Invictus label and by then Parliament had become as heavy a funk band as could be heard. Their sound was influenced by The Stooges and the MC5 as Clinton said in 2016: "Oh, we played with them all the time. ...We saw that Detroit had its own version of rock 'n' roll coming out. They influenced us a lot." [1]

As Clinton was twisting the Motown sound the MC5 were updating rock and roll, trying to play their own sonic versions of surf tunes and R&B classics, like James Brown's I Don't Mind. To my uneducated ears, their early tracks have the sound of The Who, and you can hear that even in 1966 they have a sharp, energetic crashing sound that has that wonderful cheap mid-60s production that makes drums sound like shoeboxes and some sort of wood block knocking out little triplets.

I first started listen to the MC5 by discovering their debut, live album, Kick Out the Jams. I think most people growing up in the late 80s who were trying to understand the history of punk music were led to Kick Out the Jams. Funnily enough, I wasn't too enamoured by the record. It was alright, which is good enough for me, but often seen as a criticism nowadays. I particularly liked Rocket Reducer and album opener Ramblin' Rose with it's declaration:
"Brothers and sisters, I wanna see a sea of hands out there. I want everybody to kick up some noise. I wanna hear some revolution... Brothers and sisters, the time has come for each and every one of you to decide whether you are going to be the problem or whether you are going to be the solution! You must choose, brothers, you must choose. It takes five seconds - five seconds of decision, five seconds to realise your purpose here on the planet. It takes five seconds to realise that it's time to move, it's time to get down with it! Brothers, it's time to testify. And I want to know - are you ready to testify? Are you ready? I give you a testimonial. The MC5!"


Back in the USA

The MC5's second album is called Back in the USA. It's a mixed bag for me, because their covers don't really work. Let's me be honest, I have never heard a version of Tutti Frutti that works, other than the original, of course, and on this one Rob Tyner's voice just cannot carry the song. The tracks the band write are all pretty good, and for me the stand out tracks are Call Me Animal, The American Ruse (this is what 3-chord garage rock should sound like) and The Human Being Lawnmower.
But what I want to discuss is the third album.

This blasts into existence with a deep opening chord, followed by a riff that leads into a great rock'n'roll groove that drops into that wonderful genre of songs that describe some mysterious woman, slowly giving us more and more information about "every man's saviour". The harmonica (Rob Tyner) screams along after a superb 'Sonic' Smith solo. The song wails like a ramshackle gospel chorus stopping but not stopping, as the riff bursts out at the end, a choir of backing singers repeating "She's my Sister Anne" over a feedback driven collapse. Out of the crumbling collapse marches a band of trumpet, trombone, flugelhorn, tuba and bass drum.

This one snarls out of a riff that the rock bands of the mid to late seventies would have loved. It's clear that this album is less political than the earlier stuff, but for sheer entertainment it wins for me. The chorus of this one apes Dylan's "Baby Let Me Follow You Down". The twin guitars of Fred Smith and Wayne Kramer twist around each other perfectly in the solo, building to the final verse and another run through the chorus. The song becomes choppier and choppier, with everyone fighting for space as the song slowly fades out.

A Wayne Kramer piano riff, copied by the guitar leads out this anthemic track that Kramer himself wrote, which is an undiscovered mid-70s classic rock track. Actually atypical MC5 stuff, and I can imagine any fans of the band from the early days feeling a bit let down by this one, which seems like a template for Guns 'n' Roses and a millions other radio friendly rock bands This could have easily been a hit, but it seems like no singles were released from this record.

Back in the land of garage rock and roll here, 3 chords Mouse and the Traps like groove, touching on the political in a simplistic way
Presidents, priests and old ladies too
They'll swear on the Bible
What's best for you
Atom bombs, Vietnam, missiles on the moon
And they wonder why their kids are shootin'
Drugs so soon
It sounds like it would be quite at home on the Nuggets sets and it wins wiht a delightful solo after 2 and a half minutes that then brings in the second guitar as they fight it out to the end over the top of Dennis Thompson's rolling drum fills.

From a bouncing, moody bass line this one feels more like it's rooted in the heavier supergroups like Cream and rather than being derivative it demonstrates how versatile the band were. And this track enjoys another monster drum pattern from Thompson, even if they are recorded to sound a bit dull.
The guitars dance left and right through the opening 3 minutes. A shout of "The key to the mystery" by Tyners brings everything to a calm stop. Reverbed guitars play quite little patterns into the more psychedelic section of the song. Tyner's voice clearly warping through a Leslie cabinet or some other processing as it washes in and out. All of this is designed to demonstrate the birth of a new future:
A strange new day for the people of the Earth
Traditions, burned away by the rising sun
It's a bit of a weak ending to a song that starts so well, and sounds like an unfinished idea of Tyner's to me.

A staccato riff pushes the band through another great rock track. The real star here is Michael Davis's bass that bounces under a track that sounds like it would not be out of place on one of the Norman Whitfield experimental soul-rock tracks for The Undisputed Truth. This has one of my favourite guitar solos on the record, blistering out of the speakers after a minute and a half. Tyner brings everything down quietly after that, which works more successfully than Future/Now because of how the anger returns with a final verse.

The MC5 channeling The Who on the brilliant track. Electric and acoustic guitars vie for space after a neatly picked, wobbly opening and another bass riff from Davis. Tyner sings this well, setting out his frustrations with technology and revolution when views through the lens of real life where "he cat next door spends all his time trying to think up new antisocial crimes" and "I was working in a factory, over and over, just trying to make it satisfactory". It's not a Springsteen like tale of working the factory floor but more like another of songwriter Smith's free association of rhyming ideas
The cop on the street wants us down on our knees
The president says we've got to have peace
The whole thing works because it rocks it's riffs so well and the Townsend like clangs of the acoustic guitars drive the whole things on incessantly.

Drums, drums and more drums. The "sonicly speaking" sounds thunder out at the start of this, Thompson's drums joined but an array of percussion for a good minute until Smith and Kramer hop on board with a great garage rock riff. It's more 3-chord stuff that the MC5 could do so well. This is the kind of music you can imagine just killing on stage. The drums rumble along non-stop and allow the rest of the band to open up properly. More dumb but fun lyrics carry the song along until out of nowhere a horn section appears, neatly bookending things after the horns of Sister Anne. These horns feel more free association, a touch of Albert Ayler's Music is the Healing Force of the Universe rather than the marching band sound. Funnily enough, Ayler started life off with a marching band sound which opened up to more freedom as time went by, and the horns on this album seem to do the same.
I haven't found any of this music on any bootlegs, even though the band continued to tour for a good year after this before breaking up in 1972. There were reunions (although all after Tyner had died) and I'm not a big fan of these things. According to wikipedia Wayne Kramer was leading some sort of "MC50" tour with him and "rock stalwart" that surely no-one needs to see.

Buy the MP3 album at the Amazon Digital Music Store
Buy the CD from Amazon
Buy the record on vinyl
Have a listen to the album on Google Play
[1]: https://www.metrotimes.com/detroit/george-clinton-lays-it-all-down/Content?oid=2441830
[2]: Richie Unterberger: Music USA The Rough Guide
at April 09, 2020

Scott Walker is even better than you think he is

To be isolated is always to assert oneself numerically; when you assert yourself as one, that is isolation -  Søren Kierkegaard [1] When ... 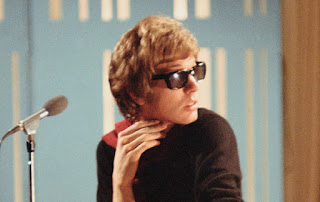